Vision of the Seas, Norwegian Fjords 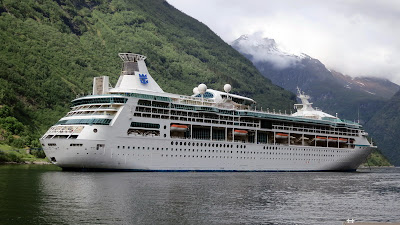 Vision of the Seas
Norwegian Fjords Cruise
June 1, 2013 from Copenhagen Posted by Mogens Hallas at 1:33 PM No comments:

Cruising the Magnificent Fjords of Norway


Vision of the Seas, June 2013 from Copenhagen, Cruising the Magnificent Fjords of Norway through Alesund; Stor Fjord and Geiranger Fjord to Geiranger;  Passing the Seven Sisters Watersfall; Sognefjord and Aurland Fjord to Flam;  Bergen and Oslo Fjord June 2013
Posted by Mogens Hallas at 10:12 AM No comments:

Map with Ports of Call


View Bigger map Click at the marks to watch videos from that location.
Posted by Mogens Hallas at 10:20 AM No comments:

Follow the cruise from Copenhagen through Skagerak and The North Sea to Alesund, Geiranger, Storefjord, Flam and the Railway and Bergen.
The video has active links to more detailed videos from cruising and ports of call - click link in video to watch the 'detailed videos' from entering Alesund (Day 3); Storford and Geiranger Fjord (The Seven Sisters Waterfall) and visit to Geiranger (Day 4); Cruising Sognefjord and Aurlandsfjord to Flam and the Flam Railway (Day 5) and visit to bergen (Day 6).
Watch the VLOG at Youtube.

Posted by Mogens Hallas at 10:42 AM No comments:

Visit to Bergen, June 6, 2013 at Vision of the Seas Cruise from Copenhagen.

Bergen is the second largest city in Norway and the most popular gateway to the fjords of West Norway. The city is renowned for its beautiful nature


Follow me on my walking through Bergen:
Bergenhus fortress is one of the oldest and best preserved forts of Norway.
The oldest surviving buildings are from the mid 13th century, but the area was a royal residence from the late 11th century. The fortress is situated close to the cruise pier.
Statsraad Lehmkuhl, a three-masted barque sail training vessel built in 1914, one of the best kept in its kind.
Bryggen (north side of the bay). Between 1350 and 1750, this area used to be a Hansa dock, trading and processing area. The wooden houses at Bryggen today were built after the devastating city fire of 1702, but are probably very similar to the buildings that were there before. Despite neglect and fires, a considerable number
of buildings have survived and are now listed as a UNESCO World Heritage Site.
If you enter some of the alleyways between the storefronts, you really get a feel of what Bergen must have been like in the middle ages. but the most interesting aspect is probably that almost all of the buildings are still in use. Building first opened for this purpose in 1708.
Bergen's outdoor fish market has a long history, being the historical center for fish trade.
Most tourists find their way here, but with locals changing their shopping habits,
the fish market today does not compare to what it once was. The fish market is dominated by makeshift souvenir shops and seafood stalls.
Fløibanen is a funicular which goes up Fløyen, a plateau in the mountain massif north-east of the city center. From here, you get a great view of the city.
And then back to the pier through the old city.
Posted by Mogens Hallas at 10:37 AM No comments:

The Sognefjord (or Sognefjorden) is the largest fjord in Norway, and the third longest in the world. Located in Sogn og Fjordane county, it stretches 205 kilometres (127 mi) inland to the small village of Skjolden.


The fjord reaches a maximum depth of 1,308 metres (4,291 ft) below sea level, and the greatest depths are found in the inland parts of the fjord. Near its mouth, the bottom rises abruptly to a sill about 100 metres (330 ft) below sea level. The average width of the main branch of the Sognefjord is about 4.5 kilometres (2.8 mi). Cliffs surrounding the fjord rise almost sheer from the water to heights of 1,000 metres (3,300 ft) and more.

Aurlandsfjord (Norwegian: Aurlandsfjorden) is a fjord in Aurland, Vik and Lærdal in Sogn og Fjordane, Norway. It is a 29-kilometer (18 mi) branch of Sognefjord; after 11 kilometers (6.8 mi), the Nærøyfjord branches from it. Flåm village sits at the inner end of the fjord, other villages along the fjord are Aurlandsvangen and Undredal.
Leaving the fjord in the evning - sunset at 11:15pm
Also see my videos from Flåm and the Flåm Railway.

Posted by Mogens Hallas at 10:35 AM No comments:

This video is from our cruising at Storfjord (Great Fjord). and Geiranger Fjord on our way to Geiranger early in the morning June 4, 2013 at Vision of the Seas.
First part at Storfjord is shot at 04:30am and we did enter Geiranger fjord at 05:30am.

Storfjorden or Storfjord is a 110-kilometre (68 mi) long fjord in the Sunnmøre region of Møre og Romsdal county in Norway. It stretches from the village of Hareid in the west to the villages of Tafjord and Geiranger in the east.
The Storfjorden system branches off into several smaller fjords including the famous Geirangerfjord and Tafjorden. At the village of Stranda, the main fjord branches off into the Sunnylvsfjorden Geirangerfjorden to the west and the Norddalsfjorden-Tafjorden to the east.

The Geiranger Fjord (Norwegian: Geirangerfjorden) is a fjord in the Sunnmøre region of Møre og Romsdal county in Norway. It is in the municipality of Stranda. It is a 15-kilometre (9.3 mi) long branch of the Storfjord (Great Fjord).
The small village of Geiranger is located at the end of the fjord where the Geirangelva (river) where the river flows into the fjord.The fjord is one of Norway's most visited tourist sites and has been listed as a UNESCO World Heritage Site, jointly with Nærøyfjord, since 2005.

The two most notable waterfalls in the Geirangerfjord are the Seven Sisters and the Suitor (also called The Friar). Both falls face one another across the fjord, and the Suitor is said to be trying to woo the sisters opposite
The landscape around Storfjorden is typical for Western Norway. The mouth the fjord is surrounded by islands with mountains reaching 500 to 800 metres (1,600 to 2,600 ft) above sea level.


In my video you will see the Seven Sister both when we arrived and when departed, I also did the bus tour

Posted by Mogens Hallas at 10:31 AM No comments:


Visit to Alesund June 3, 2013 at a Norwegian fjords Cruise from Copenhagen at Vision of the Seas Cruise. Entering Alesund early Monday morning (7pm).
Alesund is the largest city in Western Norway, with about 40.000 inhabitants . Alesund is built on a row of islands extending towards the Atlantic. The compact old city centre is thus surrounded by water and Alesund is a major fisheries harbour. The old city centre of Aesund was destroyed by fire in the first years of the 20th century.  From the city there is a beautiful view of the Sunnmare Alps in the East.
Leaving Alesund 10pm - last part of the video was shot at 11pm.
Posted by Mogens Hallas at 10:26 AM No comments:

Vision of the Seas, Tour the Ship, June 2013 at Norwegian Fjords Cruise from Copenhagen - The video has active links to more detailed videos from the different locations.

Watch the VLOG at Youtube.
Posted by Mogens Hallas at 10:23 AM No comments: 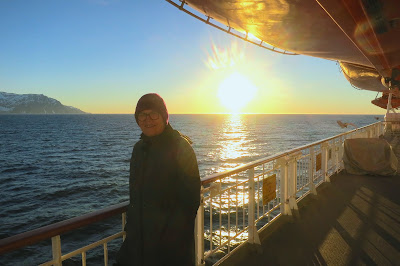 In addition to our Norwegian Fjords Cruise we have also cruised with Hurtigruten M/S Kong Harald from June 10 to 13, 2017 - three nights from Bodø to Kirkenes.
The picture to the left is taken at 01 am with sun right at the north.
See the Hurtigruten Hurtigruten Midnight Sun Cruise Review. 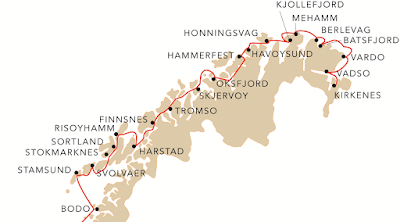 Hurtigruten sails from Bergen to Kirkenes - a 6 day trip - we had chosen the northernmost part of the trip from Bodø to Kirkenes for 3 nights. We had 20 stops during our voyage, most stops were only 15 to 30 minutes.
In Tromsø and Honningvåg we stayed at 4 and 3 hours respectively.
We were on two excursions: 'Highlights in Lofoten from Stamsund to Svolvær' and 'Bird Safari in Honningvåg'.
Read about the trip and see the pictures and videos at Hurtigruten Midnight Sun Cruise Review.


Posted by Mogens Hallas at 2:32 PM No comments: